The only time I remember feeling pain was when I got kicked by the cow that killed my mother.

She was an ornery old cuss of a Red Hereford – the cow, not my mother – that my Da was slaughtering. I was watching mouse-like from under the railings of the little killing shed, and mum was holding the cow’s head when it must’ve smelt blood and went ballistic. It started kicking like to bust down the gates of hell, bashing its great hooves into the railings. As I jumped up to get out of the way, it booted me right in the head, sent me flying back into the wall. Mum let go with a shout and leapt out to get me and the cow spun in that little stall and struck her right in her face with its front foot. Ma went down like a duck shot on the wing, her face crushed and blood flying everywhere, and the cow going crazy. It stood on Ma a few times before Da got the butchering knife into its neck and twisted so he could get past to Ma, and when he did, he lay down by her with his hand on her heart, and called her name over and over but even then he knew she was dead, and that great beast lay kicking and jerking beside them and I felt the world go black on the throbbing, shrieking ache in my head and in my heart. And that was that.

I woke up the next day, all bandaged and busted and missing my Ma, and that was the last time I felt pain. The doctor said that cow had kicked out some part of my nerves, the part that feels pain, but I thought there’s only so much hurt you can have and then you just don’t have any more.

Da was a butcher. It was hard on him, losing Ma, not only because he really loved her, loved her like Romeo and Juliet he’d say, but because she was his partner in the butchering business and now he was on his own. Except not quite, ‘cos there was me, so I started helping him, first just with little slaughters like chickens or weaners, and later with the bigger beasts. I’d hold them while Da crooned to them. He was so gentle.

Even after that cow killed Ma, he was still gentle with the beasts. I don’t think he liked killing them, it was just his job and he didn’t have much push to go and learn another one. He showed me how to put the knife to their throats, so quiet, so they couldn’t see, and talk softly, then whack! All over red rover. He taught me to butcher too, drawing lines in black marker on the flayed bodies so I could see where to cut with the axe, and where to trim with the knife, and which knife for what, and how to clean and sharpen and wash down after. But he wouldn’t let me do the kill.

I wanted so bad to learn the whole job, right from the slaughter to the selling. Since Da wouldn’t let me, I figured I’d teach myself. We had mouse traps (where there’s blood there’re always mice) so I took to getting the little bodies and dismembering them after they’d been caught. After a bit, I got Da to get one of those no-kill traps and when he wasn’t around, I carefully, quietly, held them in my hands and cut their tiny throats with Da’s razor.

When it wasn’t slaughter time Da and I would stock up the shop together. I’d sit on the bench watching and talking to the customers while Da served up packages of meat, wrapping steak in thin plastic, mince in a bag and chicken in chicken-paper before bundling it all up, adding up the sums in his head or writing them in pencil on the wrapping paper.

I was perched up watching one day when the boarding-house ladies came in for eight sausages, half a kilo of mince, two chicken thighs and a half-dozen eggs, which I knew by heart since they had the same every week for as long as I could think back. Bett started in on Da this time, started in about me.

‘It ent right,’ she said, her lips curling up as she spoke, ‘thet little gel, should be in school, not here watchin’ yez dishing meat. Should be getting edge-cated with the other little uns.’

The other lady just looked at her and looked at Da, like to see what he’d do, but he said nothing. I saw the skin on his neck get red and his eyes sort of drop a bit, but he didn’t say anything.

‘It ent right,’ she went on, ‘Little gel got no place ‘ere in a butcher shop.’

She reached her crimpled hand out to me, took hold of my hair and pulled it up on my head. Her fingers brushed the flat place where the cow got me. ‘Should be out playing and learning and stuff.’

Then the other one started too, ‘She’s right Bob, the child should be in school. How old is she now? Nine?’

‘Ten! And soon she’ll be getting – Bob, she’s going to need a woman around, you know?’ She looked at my Da like she had something secret going on between them. ‘She’ll be changing soon. Needs a mother’s touch.’

Da had been quiet all this time, but then he leaned across the counter, pushed the meat at the ladies and said, ‘I think you should go now.’

I saw a small dampening, a reddening in his eyes and face that I didn’t like. The boarding-house ladies didn’t like it either; they took their package and off they went.

But Da changed from there on, got sort of quiet and sulky. He stopped taking me out to the slaughters, and one day he came home with a bundle of books. He gave them to me, and I looked at them but I couldn’t read, and neither, it seemed, could Da, so those books just sat in a corner and got forgotten.

A few weeks after the boarding house ladies thing, Da invited Uncle Ricky over. After dinner, Da told me to go to bed so he could talk to Ricky. I knew something was up ‘cos Da had that funny red-faced look again, so I hid behind the door and listened. I just caught snippets of what was going on, bits and pieces of talk.

‘…she’ll need a woman around…’

‘Treena would just love her… she always wanted children’

And on it went. After a while, I realised Da was going to give me away. I didn’t know what Uncle Ricky and his flowery wife Treena would want with me, but over the next few weeks, Da got even more withdrawn and weird. I tried to impress on him that I would make a great butcher. I even considered showing him my work on the mice, but he shut me out more and more. When Ricky and Treena came over, I was always shuffled off to my room, and they’d talk. I’d sneak out and hide behind the door to listen. Treena spoke of ‘girls’ business’, and they spoke in hushed tones when she mentioned moontimes and something she called ‘the bleeding’. It sounded like what we did with the butchering, but mixed in with werewolves because of the moon part. And it had something to do with me.

One night Da told me that I was to go and stay with Ricky and Treena in the New Year.

In those few weeks, I felt the walls moving in around me. At night I could feel the moon through the window, and a huge empty space opened up in front of me where there used to be me and Da and the butcher shop business. Now it would be me and Ricky and Treena and who knew what?

The night before I was to go, Ricky was over again talking to Da. ‘Treena’s really excited. She’s preparing a feast for tomorrow night. I tell ya, she’s going to just eat that girl right up!’

It was then that I figured it out.

I was up as the sun tinged the sky a soft chicken-breast pink. I made my way quietly to the killing shed, where I got the big black marker pen. Lifting my nightdress, I looked carefully at my legs. The flesh curved gently between my ankle and knee, and again from knee to thigh.

That was a good joint, a long bone-in roast slashed through the knee, with a rack of round chops from the thigh. I put a line of dots around my lower ankle and another across my knee. Where my thigh joined my pelvis, I poked around until I found the joint and marked that out too, curving carefully where the sinew joined the bones together. I put an ‘X’ on my hands and feet, marking them as offal, then marked out my wrists, elbows and shoulders. I felt where my shoulder joints moved easily and put the lines there, imagining the joints sizzling thickly in a pan of fat and juices.

I pulled my nightgown over my head, discarding it on the slaughter floor near where my Ma had been killed, and I marked out my ribs one by one. Marinated spare ribs, rib-bone boil up, soup… Stomachs go into the guts pile for fertiliser, along with feet and hands. I put my hands on my lower abdomen uncertainly, then drew the offal mark on it. 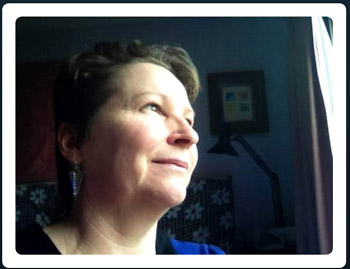 Nicky Taylor is part writer, part student, part health promoter, single mother and cat lady. She lives in a house that looks like a witch’s cottage in quake-shaken Christchurch, loves to sleep and writes whenever she can find time. She has been published in Phantom Billstickers’ ‘Cafe reader’, Broadsheet and a handful of local rags. Nicky has been a member of SIWA (South Island Writers Association) for a few years and hopes to one day publish a novel.